Among the changes I made in my life during these last 12 months was to accept an invitation to join the staff of an independent bookshop serving one of Seattle, Washington’s more upscale neighborhoods. This has succeeded in getting me out of my often lonely office, increasing my contacts with other human beings, and further enlarging my reading tastes beyond crime, mystery and thriller fiction. Nonetheless, my interest in tales of criminality and espionage has remained resilient, and I’ve been interested to see what books from that field draw the most customer attention. As we move into the present season of present giving, the half-dozen works briefly critiqued below have been among the store’s best sellers. It might be worth investigating these titles yourself as you plan what to buy for the people on your gift list.

The Adventure of the Peculiar Protocols, by Nicholas Meyer (Minotaur): 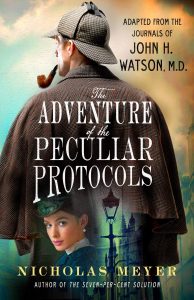 This fourth Sherlock Holmes pastiche from Meyer (The Seven-Per-Cent Solution) begins with a bloodstained manuscript page, found on the corpse of a British secret agent in 1905 and brought to Holmes by his curiously well-connected brother, Mycroft. That sheet comes from a real-life but spurious, anti-Semitic tract known as The Protocols of the Elders of Zion, which suggests a Jewish plot to take over the world—and which His Majesty’s government wishes to suppress or discredit. It’s up to Arthur Conan Doyle’s famous sleuths to trace the hoax’s source, an assignment that sends them, together with winsome young American translator Anna Walling, all the way to Tsarist Russia, one perilous step ahead of pertinacious conspirators. Meyer tells us upfront that this novel reveals Holmes’ “biggest and most consequential failure,” but that does naught to spoil what is a cracking tale enlivened by ethical challenges and allusions to works by both Agatha Christie and Alfred Hitchcock. 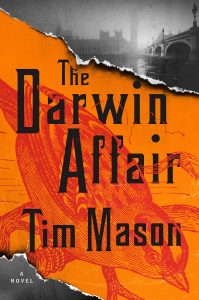 What begins as a story about attempted assassination — Queen Victoria is shot at during an 1860 coach ride through London — quickly becomes a knotty but witty mystery involving Charles Darwin’s recently publicized theory of evolution, high-level political conspiracies and an elusive, diabolically brutal killer. Responsible for defusing these volatile elements is Scotland Yard Inspector Charles Field, the oft-impetuous inspiration for Charles Dickens’ Inspector Bucket in Bleak House (as Field is so often reminded). Supported both by his resourceful spouse and by Victoria’s science-minded husband, Prince Albert, Field must confront Karl Marx and other historical luminaries as he struggles to figure out who’s behind efforts to suppress the democratizing potential of Darwin’s postulations. This may be Mason’s first novel, but it bears the polish of greater experience. 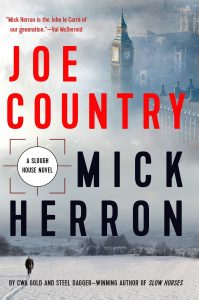 In Herron’s succession of clever, modern spy thrillers, London’s Slough House is where British intelligence agents who’ve botched missions or otherwise disgraced themselves are sent to be forgotten. Jackson Lamb, the politically incorrect and flagrantly flatulent head of that department, is supposed to keep his moping band of misfits in line. Yet they still manage to make trouble. Joe Country, the series’ sixth entry, finds Louisa Guy, one of Lamb’s “slow horses,” searching for Lucas Harper, the missing teenage son of her former married lover—a mission that will lead her and her colleagues into a dicey, protracted chase across frigid Welsh countryside, one step ahead of a rogue American spook. Meanwhile, Slough House has a new member: a putative child-porn addict who may hold the key to exposing a German intelligence operation in the UK. Herron’s waggish dialogue, eccentric players and political insights have earned him a loyal following.

Agent Running in the Field, by John le Carré (Viking): 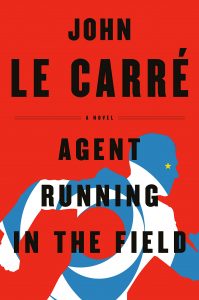 “I wanted people to get a good laugh out of it,” le Carré says of his new, 25th novel. Maybe I’m the wrong kind of reader; I didn’t chuckle even once, but I still enjoyed this meticulously crafted spy yarn suffused with politics of all sorts. Protagonist Anatoly — “Nat” for short — is a middle-aged veteran of Britain’s Secret Intelligence Service, who accepts command of a minor MI6 substation rather than be put out to pasture. Soon after, he backs an operation planned by his deputy and involving a Ukrainian oligarch linked to “pro-Putin elements” in Kiev … only to see that project abruptly cancelled and his number two quit. Meanwhile, a mysterious young man named Ed, quick to vent his antipathy toward Brexit and Donald Trump, strikes up a badminton-playing friendship with Nat, and becomes unexpectedly involved in the case of a Russian defector under Nat’s watch. Agent’s oddly sanguine ending shows le Carré’s growing ambivalence toward espionage, but his writing and plotting skills remain intact. Nothing funny about that.

The Road to Grantchester, by James Runcie (Bloomsbury): 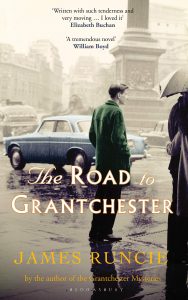 I was disappointed with this year’s replacement, on the ITV/PBS television series Grantchester, of original series lead Sidney Chambers (played by James Norton) by the Reverend Will Davenport (Tom Brittney). So it was soothing to dive into Runcie’s recent prequel novel, which recalls the circuitous path Chambers took from being a Cambridge classics student to becoming an Anglican vicar-cum-sleuth. As World War II consumes Europe, Chambers and his irrepressible friend Robert Kendall join the Scots Guards and are sent to the Italian front, where their ability to maintain optimism amid unrelenting carnage is sorely tested. Crucial to Chambers’ efforts is “Rev Nev” Finnie, an Episcopal chaplain with whom he engages in philosophical discussions — talks that prepare him for Kendall’s subsequent battlefield death and his own return home. Back in England, Chambers finds himself guilt-ridden for having survived, and at a loss to deal with Kendall’s coquettish younger sister, Amanda. Others expect Chambers to become a teacher or diplomat, but his search for peace leads him instead into the priesthood. There’s little crime-solving in these pages, but author Runcie excels at evoking the climate of warfare, and his investigations of the human mind and heart will feel familiar to any Grantchester fan.

Finally, one pulled from the non-fiction shelves … 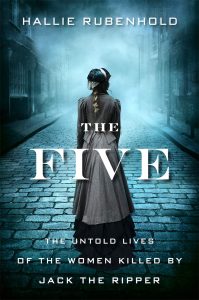 The Five: The Untold Lives of the Women Killed by Jack the Ripper, by Hallie Rubenhold (Houghton Mifflin Harcourt):

What has long been considered common knowledge about the women murdered in London by Jack the Ripper during the autumn of 1888 — that they were all “just prostitutes” — is wrong, according to British historian Rubenhold. In fact, she writes, only one of those five “canonical victims” set out to make her living in the sex trade. The others harbored loftier goals, and even enjoyed respectable lives, before they were brought low by circumstances disastrous to Victorian-age women: divorce, widowhood, homelessness and alcoholism. Although the Ripper was never identified, he became an infamous figure of enduring mystery; his victims, meanwhile, have received considerably less attention. Until now. In this impressively researched book, Rubenhold fleshes out the histories of those unfortunates, as she also examines the cultural challenges facing all women of that time. ◊