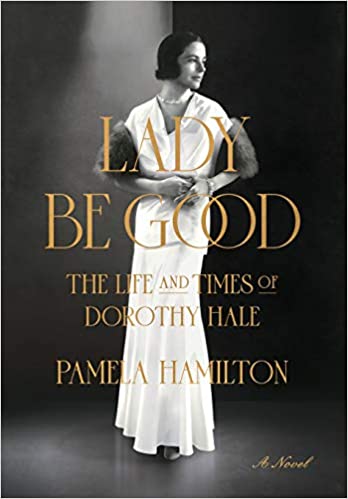 Lady Be Good, by former NBC News producer Pamela Hamilton, is a fictionalized biography of the American actress, artist, and trendsetter Dorothy Hale. Hale was the legendary beauty immortalized in one of Frida Kahlo’s most famous and controversial paintings, donated to the Phoenix Art Museum by Hale’s confidante Clare Boothe Luce. An escape into the glamour, extravagance, and genius of the Jazz Age, the narrative, “with prose as stylish as Hale herself,” traces the steps of Hale and Luce as they break from tradition to pursue their dreams.

Hamilton’s novel transports us to the glittering, sumptuous era of 1920s New York where the exquisite Dorothy Hale comes of age. From convent-school debutante runaway to sculptress, actress, writer, and adored figure in the highest echelons of society, her remarkable journey seems idyllic. Yet behind the public façade she contends with heart-rending loss and betrayal, and a tempestuous friendship with Luce, the famed playwright and editor of Vogue and Vanity Fair.

Surrounded by her fabulous circle of friends—including Elsa Maxwell, Fred Astaire, Cole Porter, James Roosevelt, and other notable figures—Dorothy finds her way to the other side of heartbreak and prepares for a White House wedding. Then, suddenly, at age 33, at the height of happiness and peak of her fame she is dealt a chilling hand that leads to the novel’s stunning conclusion.

Author Pamela Hamilton learned of Dorothy Hale when she stayed at the Hampshire House, the Manhattan high-rise where Hale lived, and found inconsistencies in the public accounts. Turning her journalism skills to discovering the facts of Hale’s life, she uncovered an exhilarating, poignant story of the Jazz Age that’s been lost to time for more than half a century. ◊