The book that has sold 10,000 copies, features powerful insights into how Sheppard Missett dominated a male-focused industry and pioneered the dance fitness movement. Celebrating its 50th anniversary in 2019, the book also highlights how the global dance fitness company has achieved continued growth and success for five decades. 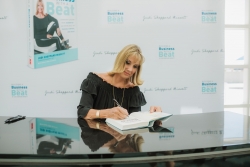 Jazzercise, Inc. founder and CEO Judi Sheppard Missett’s recently-released book, Building a Business with a Beat: Leadership Lessons from Jazzercise – an Empire Built on Passion, Purpose and Heart has sold through its first print run.

Published in late June by McGraw-Hill, and already an Amazon bestseller, the book is filled with inspiring lessons from the female pioneer of the fitness industry.

In “Building a Business with a Beat,” Missett reveals for the first time:

· Personal, behind-the-scenes stories of how her original dance class of 15 women grew into the world’s leading dance fitness program.
· How she empowers thousands of women to create their own businesses and success using Jazzercise principles.
· The secret to longevity and reinvention, plus customer retention (50 percent of Jazzercise’s customers have been attending classes for 10 years or more and eight of 10 new customers are referred by a current customer).
· How she spearheaded the women’s fitness movement and invented boutique fitness.

On the heels of the brand’s two-day, 50th anniversary, international convention at the San Diego Convention Center in downtown San Diego, June 28-29, Missett said the second print run, was humbling.

“I’m so grateful people want to read my story,” Missett said. “In reality, I wrote the book to inspire a new generation of entrepreneurs to pursue their own passions.” Nearly 3,000 Jazzercise enthusiasts from across the world attended the event that featured all-day fitness classes, a Friday Night Gala celebration with professional entertainment, a special anniversary merchandise and apparel shop, behind-the-scenes tours of the corporate offices in Carlsbad, California and an interactive museum that chronicles the many industry firsts Jazzercise brought to the fitness world.