(Editor’s note: The following review comes from Steven Nester, the host of Poets of the Tabloid Murder, a weekly Internet radio show heard on the Public Radio Exchange [PRX]. Nester is also a freelance writer whose work has appeared in The Rap Sheet, Mystery Scene and Firsts Magazine. He last wrote for January Magazine about Vicki Hendricks’ Voluntary Madness.)

Delicious Foods (Little, Brown) is a Gothic crime novel written by a narrative virtuoso, James Hannaham, who has plenty to say and more voices to say it with than a ventriloquist with a lap full of dummies. This finely crafted book updates the often lugubrious genre with satire, social 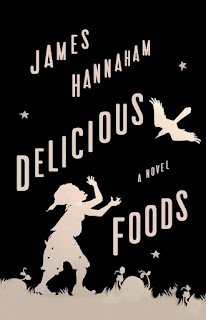 commentary and such personal and cultural detail that it gives the antiquated gloom-and-doom clichés a real run for their money.

A grief-choked mother, fallen from the black middle class, is addicted and abducted; she and her abandoned son — who never gives up searching for her — converge on a modern-day slave plantation. That would be material enough for bosom-heaving desperation and literary scenery-chewing, but author Hannaham foregoes high drama and instead gives his material a universal humanness by escorting the reader off the windswept moors and into the labyrinth of the human heart. The best-intentioned choices can backfire and the perils introduced by love — the stuff of everyday existence — are at the core of this book. Darlene, the wandering mother of 11-year-old Eddie, understands before slipping into depravity that “She hadn’t thought very carefully about how a big a risk it is to love anybody, or how much the choices made by the one you love can increase that risk.” Does anyone ever consider that simple caveat before entering into a relationship? James Hannaham could render truths from a bowl of alphabet soup if he had to.

Darlene and the love of her life, Nat, are part of a generation of African-American college graduates who took control of their destinies in the post-Rosa Parks era. Nat is a civil-rights organizer who makes the mistake of angering Louisiana’s barbarous Ku Klux Klan, the members of which “[kill] him hard, so he would stay dead,” as Darlene says. The general store that this Grambling State University-educated couple operates is subsequently run into the ground. To keep food on the table, Darlene takes to the streets and soon becomes an addict. It’s on those streets that we meet Scotty, the literal personification of crack cocaine, who narrates a good portion of this book and is the type of panderer who could charm and fast-talk you into buying a ticket on the Titanic even if you knew all about the iceberg. It’s tough not to hate Scotty.

Hannaham seems to dare his readers to resist Scotty’s charms and smoky magnetism; and while you might root for that swaggering figure, it’s only to encourage him to keep flapping his lips so you can listen to more of his siren’s song of jive-talk posturing. But Scotty’s loquaciousness requires fuel in the form of human misery, a soul to take; it’s the grist for his mill. It’s lucky for Scotty that an addict is born every second.

Addled and desperate with grief and drugs, Darlene allows herself to be shanghaied to the remote Delicious Foods work farm, which keeps her and other enfeebled derelicts imprisoned as they incur unpayable debts for food, liquor and dope at the company store. As she rides the bus to Delicious Foods, the seductive and pernicious Scotty tells us Darlene experiences a “hopegasm,” seeing herself “starring in a Hollywood movie called The Lady with the Damn Good Job,” so profound is her delusion.

This book actually opens with a scene in which Darlene’s son, Eddie, flees from Delicious Foods, bound from Louisiana to Minnesota, his hands having been severed from his body — the only way he could be free of the chains that held him. In order to find his mother, Eddie had allowed himself to be kidnapped and taken to the work farm; but there he found his mother an ambivalent captive caring for and carrying on with Sextus, the plantation owner. Bewildered but determined, Eddie must escape without her.

The conventions of Gothic fiction are all here: the decaying plantation, Darlene’s fall from grace, the villainous Scotty and the supernatural aspect. Yet they aren’t distracting as elements of a passé storytelling style; this is no retro-howler. Gothic in Delicious Foods works — you won’t even know it’s there, because the conventions of the form are merely the delivery system. They enable the reader to connect with characters who, thanks to Hannaham, view their wretched conditions with invention and wit. To read Delicious Foods for its literary conventions would be similar to reading Ulysses because you admire the Odyssey.

Young Eddie is this yarn’s hero. After escaping from Delicious Foods he becomes a successful handyman and finds further rewards as a father, husband and business owner, all of the things Nat had previously attempted but was unable to achieve. Of the various characters in these pages, Eddie seems the most likely to receive the greatest damage from his circumstances. But, being level-headed and focused, maimed only in body, he accepts his situation of dismemberment and rehabilitation, and views the consternation of others with composure and a positive perspective toward the long view. He “preferred curiosity to derision,” Hannaham explains, “so he controlled his impatience because the discomfort came with a bag of gold attached.”

This book is not a cry of alarm that “it could happen here” (as it has), but a reminder that in this game of life you’re dealt a hand, and how you play it — for good or bad — is strictly up to you. Whether you win or lose, it’s best to make peace with your circumstances and move forward. It would appear that the eponymous delicious foods are human beings. Those who aren’t mercifully consumed by life are chewed up and spit out. Maimed and mangled — mentally, spiritually and physically — they are at least lucky enough to have the opportunity to begin life anew. ◊