Whatever you expect when you pick up Bill Schutt’s Cannibalism: A Perfectly Natural History (Algonquin), humor is probably not part of it. Cannibalism is certainly not laugh-out-loud funny. It is, however, muscularly written and the dark material is tamed somewhat by a deep and intelligent wit that cuts a strong thread through all of this surprisingly enjoyable book. 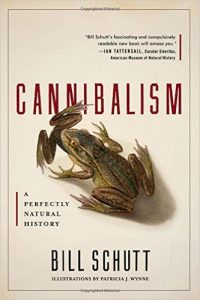 I was knee-deep in a temporary pond that seemed to be composed of equal parts rainwater and cow shit when the cannibals began nibbling on my leg hair.

“If you stand still long enough, they’ll definitely nip you,” came a voice from the shore.

The “they” were cannibalistic spade foot toad larvae (commonly known as tadpoles) and the warning had come from Dr. David Pfennig, a biology professor at the University of North Carolina who had been studying these toads in Arizona’s Chiricahua Mountains for the more than 20 years.

And here, at the very beginning of chapter one, we’ve had our first encounter with both cannibals and Schutt’s dark wit.

Cannibalism is a multi-faceted book but, at its core, it is an entertaining popular history of cannibalism. But don’t think Hannibal Lecter here (though he gets a mention) but rather where Cannibalism occurs in nature and what changes have to happen in order for it to do so… if and when it does.

Schutt looks at canniibalism as it occurs in nature (where it does with great frequency) and also some notable human occurrences. For instance, what really happened to the Donner Party? Why do some insects bite their head of their partner off after sex? And why, until the end of the 20th century, did Europeans eat human body parts as medical curatives. Notably, too, Schutt looks into the future to see where outbreaks of disease, famine and overcrowding might lead to instances of cannibalism.

Despite all of this, Cannibalism is a deeply satisfying read, with new facts on every corner. You walk away from it with the feeling that you own a larger view of the world. ◊