Skip to content
> 2015 > August > 18 > Making Spaces: Two Prominent Architects Who Are the Same… and Very Different 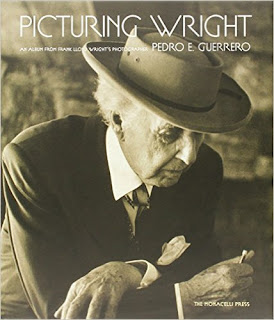 established his design studio in London in 1984 and is still working. The two could not be more different, except in my mind there are key similarities.

Both men changed the way we look at spaces and the buildings that occupy them. Both created eye-popping, imagination-inspiring structures that satisfy expectations and challenge limitations at the same time. Both worked with a singular vision that provided a clear path for their associates as well as a place from which those associates might make contributions of their own.

The work of both men has been captured in two wonderful new books. Guerrero’s Picturing Wright (The Monacelli Press) is the umpteenth book about the world’s (possibly) most famous architect. For 20 years Guerrero was Lloyd Wright’s official photographer. In the more than 200 images in this book, almost all in black-and-white, we see Wright at work, consulting with colleagues and clients, and at leisure. We see houses and buildings under construction, the kind of behind-the-scenes glimpse at the artist that I can’t remember seeing anywhere else.

The photographs are beautiful, augmented by text and captions that sort of fall away in favor of their topic. But that’s okay because the real story is in the images, and each one is a rich testament to a man who seemed never to stop thinking. The elegant shots here make Wright seem the classic architect he remains, even almost 60 years after his death in 1959. His vision shines through, his unwavering commitment to allow space to inform what he puts in it. Which brings me to Thomas Heatherwick. I’d never heard of the man until I saw this book, and now I think 640 pages is too few. Heatherwick takes Lloyd Wright’s app 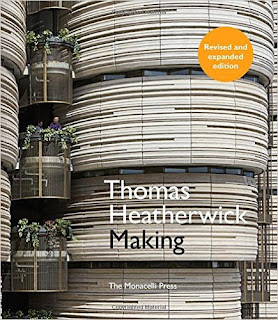 roach of considering space to the highest degree, and then brings a fearless, contemporary execution to it.

Arranged by project and covering 140 of them, Thomas Heatherwick: Making (The Monacelli Press) provides hundreds of photographs and lively text that explains what the photographs cannot: the thinking and the process behind the work.

Whereas Lloyd Wright was an architect, Heatherwick is a designer. In this book, you’ll find buildings, furniture, parks, bridges, double-decker buses, a boat, a theater, gardens, and a host of Christmas cards sent to his firm’s clients. And plenty more. Is there anything Heatherwick won’t tackle? Is there anything he can’t do? What strikes me about Heatherwick is his insane attention to detail. Texture, color, trim, reflection, the play of light, the qualities of the fold, and on and on. Every detail matters. Every detail, no matter how small, plays a part, a critical part, in the whole. It’s his mind, his intension, his way with material and color, his reverence and irreverence for past, present, and future, all together, that make his work come alive and bring everything around it roaring to life in ways we never thought possible. Lloyd Wright worked for almost 75 years, and Heatherwick has worked for only 21. But if intense focus, respect for environment, and enormous creativity are any indication, already it seems that Heatherwick’s mark will be as indelible as Lloyd Wright’s. ◊