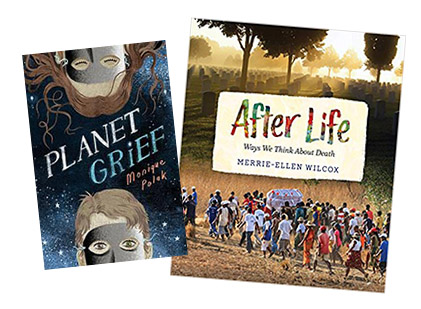 Two new titles out from Orca Books are aimed at helping kids deal with grief and death, albeit in very different ways.

In After Life: Ways We Think About Death, author Merrie-Ellen Wilcox demystifies many of the things our culture has thrown mystery over with a very lucid, hard and fast look at pretty much everything to do with death and dying. Why do we die? What happens after death? What are some of the customs and thoughts around this inevitable part of life? As Wilcox says in her introduction “… these days we don’t talk much about death, especially around kids. Why is that? All human beings die, after all — and with almost eight billion of us on the planet, there’s a lot of dying going on.”

This fresh, friendly and matter-of-fact tone is what makes After Life really work. This is a useful and interesting book intended to help nine to 12-year-olds deal with all of the thoughts and issues around this sometimes shunned topic.

Planet Grief by Monique Polak takes a very different approach. This novel is aimed at the same age group — nine to 12 — but here we meet four kids in their early teen years who have been sent to a grief retreat to deal with their feelings on the loss of someone close to them. As

one might expect, they come to the table with quite different expectations and degrees of willingness to be there.

The story is engagingly told from the changing perspective of two narrators: Abby and Christopher. It makes for an intimate and sometimes moving view. As the jacket copy summarizes:

What a crappy way to spend a weekend. Abby would rather be playing soccer, and Christopher think a grief retreat is a waste of time. But despite their best efforts, Abby and Christopher are drawn into the lives of the other kids at the retreat. Neither of them wants to spend two days talking about their feelings — or reliving what they’ve lost. And yet, here they are.

Despite the dark topic, there will be respite from the duo’s encounter with Planet Grief as both of them discover that, though their feelings and memories must be honored, life does in fact go on. ◊